Find out how you can help

HOPE depends on donors, fundraisers, volunteers and sponsors to change the lives of abandoned street children in Kolkata. We work to break the desperate cycle of poverty. Change starts with you and is possible thanks to your generosity and action. The Hope Foundation funds and operates over 60 projects to restore childhoods with love and care.

There are so many ways you can get involved, both in Ireland and in India. Together we can make a difference! 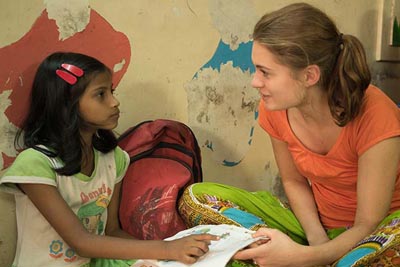 We also had 36 Indian volunteers and 51volunteers from international in the last year many of whom have come from prestigious Institution including Rabindra Bharati University, Institute of Technology, National Law University, St. Xaviers, Christ University and KITT Law School and 10 no. of schools from Ireland.

The result is an exchange of information that adds a new dimension to many of the projects and is an enriching experience for both parties. Many of them form a deep connection with their work here with the children and the staff and that is why we have many return volunteers every year.

Thanks to the International visitors visiting us and encouraging us.

Send us your details

I arrived in Kolkata in October 20003 to work as a volunteer with the Hope Foundation for six months. Kolkata was flooded as a result of a late monsoon and I was utterly immobilized by the crowds, the noise, the filth and the depth of poverty apparent on the streets. Today I move with relative ease within the project areas of HOPE

Many things have changed over the past eight years, the city's population has grown, the Western influences are more apparent in the numbers of private cars and the building of shopping malls. However the benefits of India's emergence as a significant world power do not appear to have impacted hugely on the lives of thousands of people living on Kolkata's streets or in her slums.

It is in this area that HOPE has grown, funding over 60 projects ranging from Protection Homes, to Coaching Centres to Hospital Care, Anti-Trafficking and Anti-Child Labour Campaigns, a program for the Homeless Mentally ill, rehabilitation of solvent addicted children to a Mother and Child Home to name but a few.

I have witnessed children growing into educated adults, taking control of their own lives, starting their own families with their sights set on a better future. HOPE has made a difference to many peoples' lives and will continue to do so despite the severe recessionary times in Europe.

This is what sustains the commited Indian staff and the volunteers with HOPE. 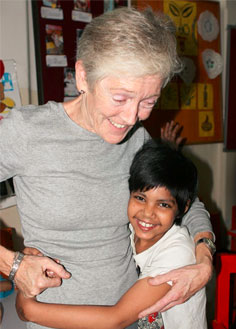 When I first came as a volunteer in 2007 to Hope in Kolkata I didn't know what to expect. I was a TEFL trained teacher in Ireland with experience of teaching adults but never with kids. I had been told that I would mainly be working with kids in a centre which offered protection, nourishment and education to street children. Hope has four such centres under the Nabaasha project. With their parents out working for a few meager hard earned rupees these children were left to look after themselves on the street. The centre was a safe haven for them. When I was told I was going to be teaching in all four of the centres I quickly became very nervous. I had been told there could be anything up to 30 or 40 children in each centre waiting for me!! I had no idea how I would manage or what I would do with the kids. Suddenly I had sympathy for my First year Maths teacher.

My first day arrived and I went to the centre armed with a few games & worksheets. To say that it was the best day of my life at that time would probably be close to the mark. First was the welcome. Twenty or so children aged between 4 & 10 gathering around me shouting 'welcome Uncle'. Beaming smiles on dirty faces, eyes with an inner light that is rarely to be found at home in Ireland. All my fears were forgotten in a heartbeat. We started with a few of the classics 'Head, shoulders, knees and toes' then to 'ring a ring of roses' and finished off with 'Hokey Pokey'. Their enthusiasm to participate, the pure sincerity of their laughter was a breath of fresh air to me. It wasn't teaching but it was great fun and we were getting to know each other. I knew at that moment I was being given a gift and I wanted more than anything to give them something back. I therefore set myself the task of doing what I could to help them with their English. In Kolkata if you have English you can almost double your wage. 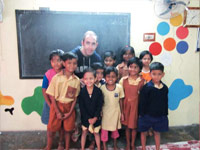 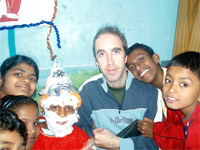 Fours years later, I am still here, although next year will be my last year. I definitely feel I have discovered a treasure here, for my life is certainly richer. However, I cannot help think that as I move on with all my opportunities I am leaving these childrenbehind with relatively fewer. I shared with them the classroom but I never had to go home to sleep on the pavement or to look for recyclables in the rubbish dump, especially not when I was six years old. Then I think of how when I first arrived very few of the kids in the Nabaasha centres were attending school. Now that number is up to nearly 90%. This is due to the hard work of the teachers in working with the community. Change can be a slow process. You do what you can with what you have and Hope is doing a lot with what it has.